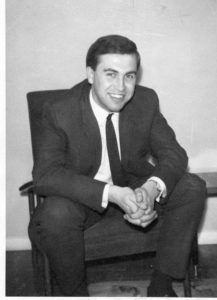 Ken Underwood talks about his life in the early sixties:

“My time at EMI was OK but not very fulfilling, as also was mentioned by Dudley when he went to work for Jim Marshall.  The reason why I went there was quite simple, my uncle Jim, who I loved and admired, was the Production Manager and had worked his way up right from a young age starting in the machine shop.

He said to me, knowing that I was interested in electronics – and this is how he always spoke to me: “Lad, I will get you the interview and you have to do the rest” i did and they accepted me and I earned a princely sum of £26/month. It was quite upsetting and embarrassing as my dad who was a bus driver at Southall garage and had been doing that for nearly 30 years, only just had the same wage per month as me.

The EMI Springfield Road operation did not do too much for me as it was so specific to guided weapons which did not interest me one little bit.  I left when  I had an offer from Elliot McDonald G3MUV who ran the Ground Radio workshop for PanAm (which was situated above the PanAm commissary building beside the hanger that housed the Airborne Radio and Radar workshop where Dudley eventually worked) this also is where Ken Bran worked previously.”

At least EMI sent me to Southall Tech on the same course as Dudley just a year later, i did not know that until you sent me his Resume but when i went to Heathrow PanAm honoured the course and i carried on until i passed.

I met Sylv as we said on a blind date at London Zoo, courtesy of Lynda and Graham in 65/66 and left PanAm to get married in 67 and move to Harlow in Essex and set up home there, working for Cossor Electronics involved with secondary Radar.